Greer is one of the fastest growing cities in South Carolina. It is situated right in between two major cities, less than fifteen miles north of Greenville and less than twenty miles south of Spartanburg. The city spans more twenty square miles with views of beautiful mountains and lakes. Just north of the city are Lake Robinson and Lake Cunningham. South of the city is easy access to I-85 and Greenville-Spartanburg International Airport.

The growing city boasts several attractions. Greer Station spans 12 blocks and houses several restaurants, retail stores and entertainment venues. It is also home to the city's municipal facilities making access to the police, court and City Hall readily available. The City Park is located nearby. Its 12 acres holds walking trails, a pond, a children's play area and an amphitheater for public performances and ceremonies. Festivals and events are held at the park throughout the year. Oktoberfest, Chili Cook Off and Greer Family Festival are just a few of the events held by the city. Residents and visitors to Greer can learn about its history at the Greer Heritage Museum. Car enthusiasts can plan a trip to the BMW Visitors Center or BMW Performance Driving School. Animal lovers can visit the Hollywild Animal Park in neighboring Wellford. Shipwreck Water Park is located in Duncan, less than 10 miles from Greer, for the hot summer days.

Don't want to wait on a new build? This inviting poplar floorplan in Franklin Point is just the home for you. Conveniently located minutes from the interstate, great jobs...

Here is your chance to own a beautiful private retreat just minutes to Downtown Greenville. Sitting on roughly 1.5 acres, this craftsmans dream is ready for your vision....

WOW!!! Talk about Curb Appeal, this Super clean Home sits on over an 1 acre lot that is tastefully landscaped boasting of sprinkler system and Zoysia sod. Well maintained...

CHARMING 2 BR/ 2 BA bungalow nestled on a well landscaped corner lot in the heart of thriving downtown Greer. This home lives large with an open floorplan of over 1700 sq...

OPEN-CONCEPT LAYOUT Don’t miss this opportunity to own a DELIGHTFUL NEW 2 Story home in the Magnolia Green Community! The desirable 1401 Plan boasts an open concept desig...

This quality custom-built 6 year old house, located in an established neighborhood in Greer, could be your new home! This house is on a quiet half-acre cul-de-sac lot and...

One Level Two Car Garage...Lattice Screened Porch With Fenced In Back Yard. Small Patio For Grilling Out. Home Is Attached To One Other Unit & is Considered A Townhome,...

You'll love this cozy home on .9 acres. The feel is rural. Yet, its minutes from Greer or Landrum. This house has tons of potential and is waiting for someone to make i...

One of our newest floor plans, the Cameron has 4 bedrooms, 43 baths and a gorgeous 2nd story living room . Formal dining and gourmet kitchen with granite countertops and...

Prime location, private and updated in and out! This home is minutes from downtown Greer, on a quiet cul-de-sac with convenient access to shopping and dining. Inside fea... 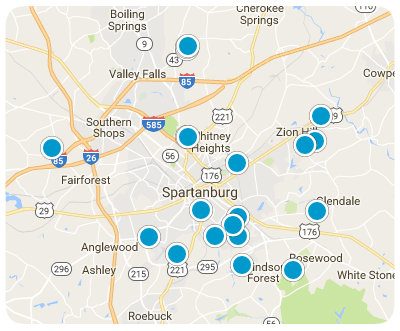